The wedding planned for April 4th 2020 had to be cancelled because of the lockdown for the COVID 19 pandemic. Four months later, the bride and groom decided to make a new plan for Saturday August 15th, the first day that receptions were to be allowed, although with many restrictions.

At midday the bride received a phone call from the lady in charge of the church hall. She said that wind and rain were forecast for the next day and so the choice for the reception was either to be socially distanced outside in the small space of the church memorial garden, or to be in the church hall with all the doors and windows open; each family group at socially distanced tables and NO-ONE ALLOWED TO LEAVE THEIR SEAT!

Oh, dear. It seemed an insurmountable problem; should they choose the garden and risk everyone getting wet; the hall with the problem of keeping very young children in their seats for an hour or more and no-one able to talk to anyone from another family group; or something else altogether? One phone call solved the dilemma. A village ten minutes drive away agreed to the use of their field for a picnic. 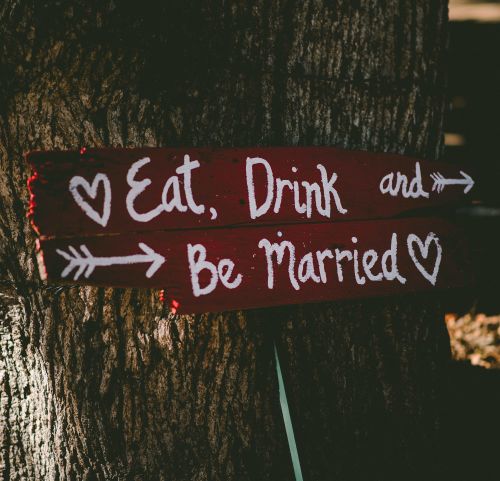 At 11.00 am the guests had sanitised their hands, written their contact details on a list, put on their face masks and were sitting in the church in family groups with an empty pew between each one. The bride and her father (who did not live in the same household) arrived to walk down the aisle, socially distanced by holding either end of a yellow ribbon - and the ceremony began.

There was some recorded music because no singing was allowed and at the moment that the bride and groom were pronounced husband and wife, the guests provided a noisy “hurrah” using percussion instruments instead of cheering, which was also forbidden. A special wedding licence had to be obtained and each person signing the marriage registers had to use a separate pen. Even the photographs outside couldn’t be in the usual groupings.

The caterers had provided a picnic box for each family group which they brought to the village field. There, kind friends unable to be invited to the wedding (because the rules stated a maximum of 30 people) had erected borrowed gazebos as shelter from the rain; borrowed bunting and a few vases of flowers on the grass for decoration; and a small table for the cakes. It looked lovely. Delicious picnics were eaten, speeches made, and toasts drunk to the happy couple. Guests were able to move around to talk to each other, easily keeping 2 metres apart, and the children played in the field. It was a happy and relaxed event.

And the most amazing thing – the weather forecast was wrong.  The sun shone all afternoon!