These stories have been kindly shared by ordinary people in our and your community. They form part of our resources for teachers and community / youth workers seeking to process the events of Covid-19 within their schools, community projects and well-being settings. We are inviting written or oral contributions from people of all ages and all sections of our community so do please share this page freely or download our E-POSTER. For more info and to give a voice to your story please download one of the following forms:

My name is Lolly and I am 10 years old. I have a brother, Frazer who is 8 years old and a baby sister Cece who is one. My mum and dad had to work during lockdown and we stayed with my Nana and Poppy who live downstairs.

My Nana did a lot of schoolwork with us which is quite good because she is a teacher. Some of the subjects I was given from school were tricky because I didn’t even know how to do them but Nana taught me them from scratch, she is quite a good teacher!  I am going into year 6 now and I have SATS next year and I do not want to fall behind. I enjoyed studying with my Nana but it was sometimes a bit stressful – learning at home is incredibly stressful!

It has been quite hard with my dancing, we haven’t been able to dance face to face, or practise our routines on zoom because of the timing and the delay when dancing in our groups. We were meant to go to the Dance World Cup in Italy where we dance against a lot of different countries. We came 3rd last year and we all got medals! There are about 20 children in my group, and I am one of the oldest.

We will have missed 6 months of school in September. I went back on two set days for three weeks, but it was quite hard because in our classroom we had no decorations or displays. We had to stand on little dots as you couldn’t really go near anyone or sit with anyone else on your desk and it felt a bit lonely at some times, it wasn’t quite easy to play with people. 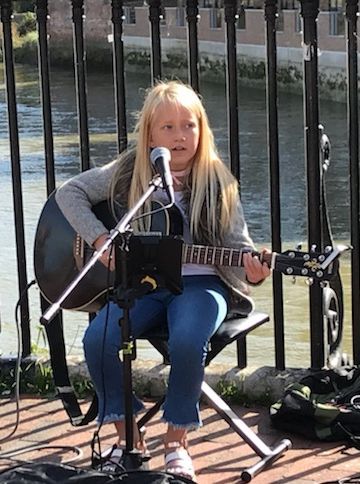 I sing and play guitar, my Granddad does too. For the past six weeks on a Monday night we sang songs in front of 20 people in an Open Mic on zoom. There were no other children and I was the youngest.  Some of the songs we did are ‘I was only joking’ by Rod Stewart and ‘My Girl’ and next week is going to be my favourite. We’re doing a song called ‘Old Man’, it’s a lovely song to sing and Poppy has a lot of memories from it.

My birthday was really fun. Some of my presents were activities to do, we made cakes and brownies and we made some slime. A group of really close friends pulled up in their cars at the front of our house on the curb and sang the Birthday song which was really sweet. I feel it might have been better than if I had my birthday not in lockdown because every year normally I have the same party, a disco - it’s nice that I did not have the same party this year.