They say that you never know how you’re going to react in a crisis until it happens.

When the pandemic hit, my first thoughts were a strange tangle of fear, disbelief, denial and hope. I contacted loved ones, friends, family and even people I hadn’t been in touch with for ages to make sure they were alright. Even while I was guiltily enjoying the reduced traffic noise, increased wildlife and Blitz-like community spirit, my thoughts turned more and more to people whose home life would have become like a prison; for some a place of real danger. I found myself wanting to reach out and help. I knew that support services were being inundated with people like me trying to be helpful, and that’s when The Bevy meals on wheels project grabbed my attention. 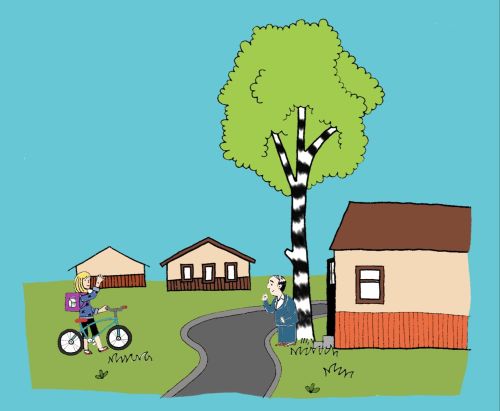 I started delivering hot lunches once a week to local residents in the east Brighton area. People who would usually have been coming together at one of the supported social clubs at The Bevy to enjoy a meal and group activities but were now stuck at home, often on their own. I felt socially awkward at first, not sure of how to talk to strangers through my mask and gloves; worried that I wouldn’t know what to say or that I’d do the wrong thing. I got to know the faces on my route, and I found myself enjoying my hour of deliveries and chats.

One Friday, Terry, one of my regulars, told me that he’d not had TV or internet since a cable had come loose from the wall. I put together a list of local companies who could come out and give Terry a quote for the work. It took me a week or so to realise that Terry didn’t have anyone else calling in and no phone to contact an electrician himself. I made contact with Fiona at Sacbod Electricians who, despite having no availability, came out on a weekend especially because of Terry’s situation. I met Fiona at Terry’s on a Saturday morning, and after a quick look at the problem, was able to fix it on the spot.

Although I’m good at the practical stuff, good at delivering the meals efficiently, good at getting the work done, I’ve never worked as a front-line person before. I thought I wouldn’t be very good at going beyond simply providing for people’s basic needs; that I’d be too scared, too formal, too boring, but I’ve realised that I was avoiding something else. I’ve shied away from this front-line work because it means feeling deeply for someone, risking having them rely on me. It means caring. So now I care about what happens to Terry, I’m anxious for him, I want him to be okay, he matters to me. Getting close to people can be scary, but I’ve also learned that it means I care, that I matter, and because of that, I can help.

Now I know how I react in a crisis -I can count on myself to care.