My name is Marie-France so you might guess that I am French. I came down with the virus on 12th March  and our lockdown in France came just a couple of days later. I felt like I had flu but with sudden peaks of fever. I was achy and headachy and sleeping most of the time. My husband Nicholas became a first class nurse. He looked after me, propped my pillows, entertained me; he cooked and brought me food, but I had completely lost my sense of taste and smell so I could sense the texture of my meals, but they tasted of nothing. I’ve still not got it fully back and have to add a lot of salt and pepper to my food!

I am 72 and I don’t do “ill”. But here I was, so weak and unable to walk barely 200 yards. Being usually an active and healthy person I was lucky, I recovered at home – although months later I still have post-covid symptoms and have had to slow my life down, a big change for a busy me.

Back in March I was eventually well enough to come out for the nightly clap at 8pm for health workers. It’s been so important, starting up on 18th March in council apartment blocks in Paris where people were inspired by the same idea in Italy. A hospital director told us on the television “every night we know, we feel it, that you are thinking of us and you are behind us”. He had teary eyes. It’s one of the ways in which we have been unified in our solidarity. I grew up in the shadow of the Second World War when France was an ‘occupied’ country. You understand danger on your doorstep and being restricted in your movements. I wouldn’t say we are a very disciplined culture in general, but we know from our history that in a crisis limitations are needed. We needed to be told clearly what to do and our politicians acted quickly. They were also humble in the face of the virus and the changing information. So most people trusted them and complied with the strict lockdown. 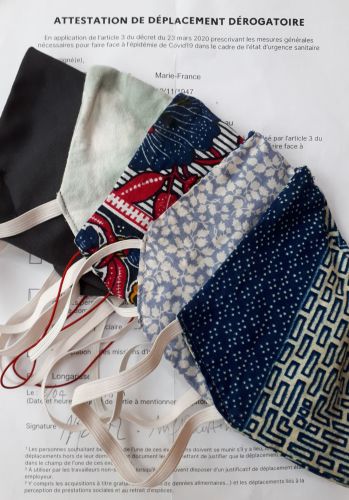 And it was strict! From the outset you were only allowed out of your house for essential needs: visiting the doctor, chemist, supermarket, or helping a vulnerable person in need. At first you could exercise up to 1km from your home but that soon stopped too… unless you had an essential outing or to walk your dog. Lucky us that had Minnie the Springer Spaniel to walk every day! You had to get a paper signed by the police called an “Attestation” and giving you permission for each outing; the police came down the street every night, checking that people were staying at home. In more normal times we have a lot of social and political freedom in Europe and it’s good in a way to be reminded it’s not the same everywhere. It felt like curfew time; but it also felt contained and reassuring to me.

By April we were advised to wear masks and councils had to make sure there was access to masks for everyone who wanted them. In our small area this really brought everyone together. The Mayor put a call out to borrow sewing machines and receive help from those who could sew; 60 people came to the town hall on one day to make free masks, all from donated fabrics. There was a very organised system to collect them from the Town Hall, a mask for each one of us, every resident. I have seen this sense of sharing across Europe too, not in the beginning when we were all needing to look after ourselves, but then France was sending doctors to Italy, experts were coming here from Germany, a solidarity across boarders and a sense that we are all in this together.