Until the lock down I was the busiest woman, everyone always said, if you want some help, ask a busy person. Well, it seems I was one of those. I have two jobs and do a lot of volunteering as well. Too much to do, no time to rest. Now I am resting a lot. The store where I work is shut.

We are quite a physical group of people at the store and often hug. While we were still open but sanitising all surfaces we touched, I wanted to hug someone. I said to her, can I just give you a backwards hip bump instead? She said yes, and we bumped. Later I found out it was her birthday, so I had given her a birthday bump at least. I miss my colleagues and the fabulous work atmosphere we have. It is inspiring and healthy to see friendly people every day.

My other job as writer and director of shows also came to a halt. All theatres are closed, no rehearsals are happening, all shows are cancelled. Because I was so worried about the virus to begin with I did not feel creative at all. You’d think this would be the ideal time to write, but for me it was difficult. Then I was inspired to write haiku, which are very short and very precisely timed Japanese poems, and that helped me get started again: 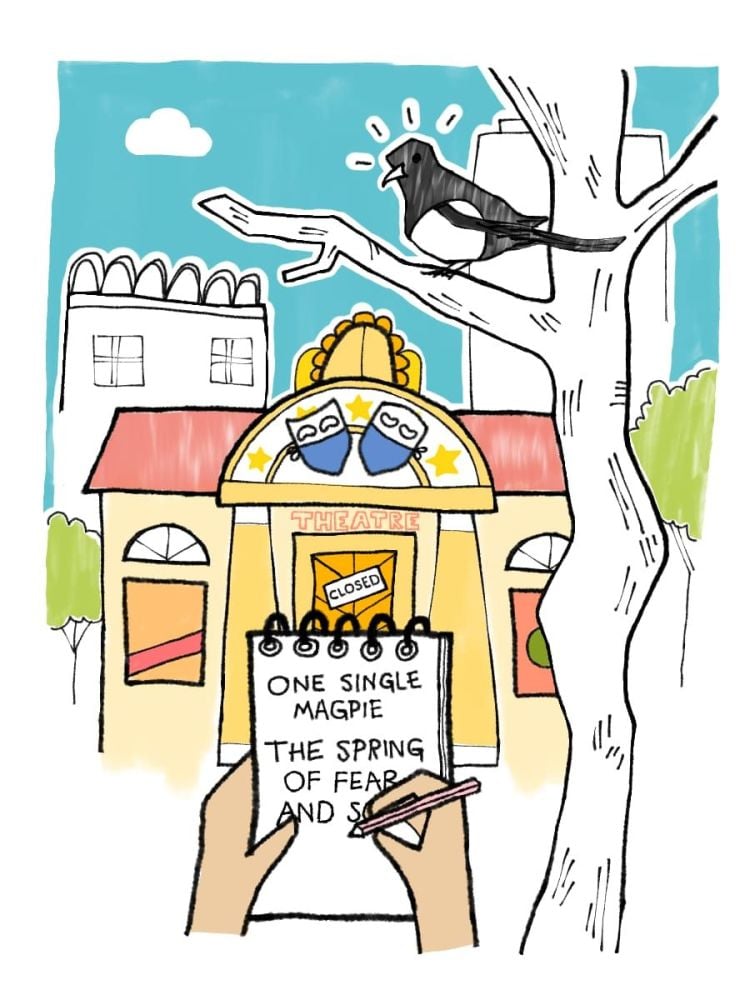 It has been a great challenge for me to concentrate on anything work related. Luckily I read that other people were struggling with similar problems.

I have been very frightened of this virus because members of my grandparents’ families died from the Spanish Flu in 1918. My grandmother remembered it well, and in my family people did not hug because it was considered contagious to do so. My default setting has been for years that I always have a stash of tins and pasta etc. hidden away in my cupboard. This mania to be provided for any catastrophe comes from my grandmother who had been a refugee at the end of the Second Word War and ended up with nothing but what she and her three kids had been able to carry. No food, no plates, no soap. She had and I always have a good stash of soap.

What I keep telling myself is that I am one of the lucky ones; so far nobody I love has become ill. I have been spending a lot of time with my family, walking, talking, sharing meals, being kind and lovely to each other.

In the park walking the dog one day with my daughter who is 19 and lovely, we chatted to a young man. This was about 4 weeks into the lockdown. His name was Jason, he was in his late 20s and a nurse at the Covid Ward in Brighton. He told us that he lived alone and his birthday was coming up, that he had been working long shifts non-stop, that nobody cooked or shopped for him. He told us that he missed his mum who lived further away. I think of him every day and hope he is safe and coping. I look for him in the park each time we go, but have not met him again. He said: “Don’t get it, it’s nasty.”